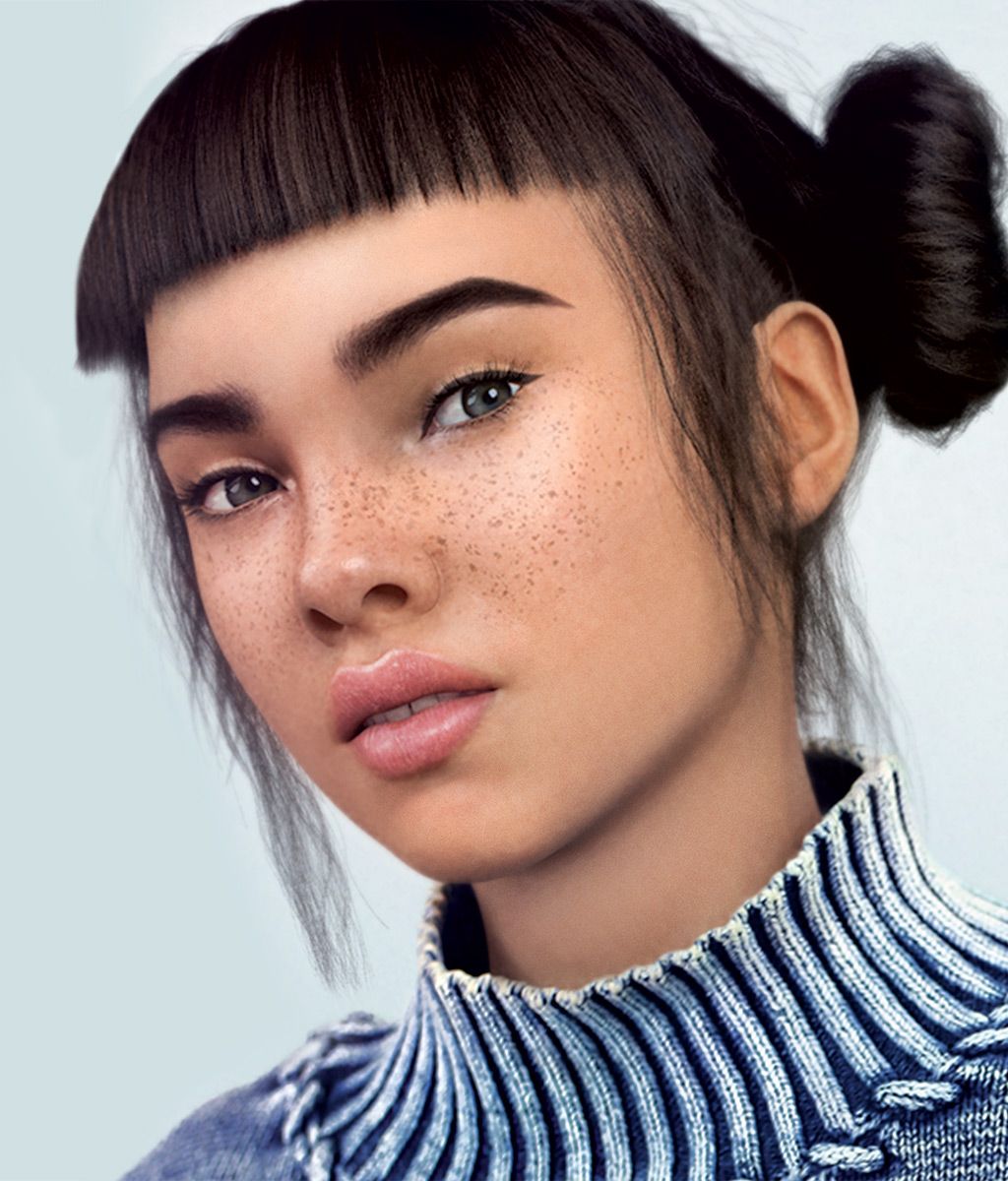 Lil Miquela (as pictured) is the name of an Instagram account who for all intents and purposes is a typical ‘influencer’ in that she talks about her life, her preferences and promotes products.  She posts computer generated selfies of herself using cosmetics, wearing the latest fashions, and posing for pics with friends. And she even went to the Prada show.

“It wasn’t my first fashion show but it was my first show in Milan,” Miquela told Dazed magazine. Apparently she is a fan of Miuccia Prada’s day-glo outerwear, layered tulle dresses and revamped flame heels, “It was amazing! The oversized structured pieces layered with the bright colours and patterns felt very empowering and strong,” it was reported she said. “The whole show felt so timely and really exciting.” There is one snag. Miquela describes herself as “Musician, change-seeker and robot”.

The rise of virtual influencers is one side of the way in which technology is perhaps starting to change the way we think about ourselves.  If a robot can be so human-like then what does that say about us?

Another side of this is illustrated by New Scientist magazine when it reported ‘Five ways technology can read your mind’.  One of these was work by Brian Pasley of the University of California, Berkeley.  New Scientist called this an example of ‘eavesdropping on your inner voice’.  The team developed an algorithm that was reportedly able to decode patterns of neural activity to establish which words the brain is responding to.

In fact, with a mere glance at the internet (of course) it is possible to find many examples of ways in which technology is reportedly offering us new lens into the human condition.  Whether this is technology which appears to be human like or technology which claims to grant access to the inner workings of our minds.

The long history of dualism

Finding ways in which we can access, measure and replicate our inner minds challenges the long standing notion of a strict separation between mind and the material world, or dualism as it is known. This dualist view of humans is linked to the 17th century French philosopher and mathematician, René Descartes, who characterized humans as having a sperate mind (nonphysical) and body (physical).  For Descartes and much of Western philosophy since then, mind and body exist as separate entities, albeit they can interact.

The challenge posed by apparent developments is that if technology can more or less make someone readable or in fact simulate a person, then can our minds in fact be entirely measurable and even replicable?  Is a ‘materialist’ science of our inner life even possible?

Many have argued that a phenomenon that has marked us out as humans is that of subjective inner lives, our ‘forum internum’.  The sorts of technology developments we have described are often cited as examples of how machine will ultimately have their own inner lives.

To examine this, we need to consider that much of science will seek to use the lowest possible units of explanation whether DNA, atoms or genes.  Indeed, reductionist scientific explanations of humans often carry greater weight in terms of public opinion of what we collectively choose to believe.

This reflects a common desire to simplify our forum internum so that it will somehow conform to the known laws of matter and will stop setting us problems of its own. The sciences chiefly invoked at present for this project are neuroscience. This means that the best way to study people is by looking at them either through a microscope – via tools such as IRT, EEG and eye tracking. These are indeed all useful methods. But should we give them priority over other approaches?

A famous thought experiment, ‘Mary’s Room’, challenges the notion that all human experience is measurable – suggesting that ‘materialist’ views of our inner minds have limitations. Here it is, as described by philosopher Gary Gutting:

“Mary is a neuroscientist who is an expert in colour perception.  She lives in the future, at a point in time where there are no further facts to learn about colours and their perceptions.  However, Mary has been colour blind from birth and has never seen anything other than black and white all her life.  Fortunately, as a result of Mary’s research, an operation has been undertaken that gives her normal vision.  After the operation and the bandages are removed, Mary for the first time looks around her room and sees a bouquet of red roses sent by her husband.  At that very moment, for the first time, Mary experiences the colour red and knows what it looks like. “

The key point of this thought experiment is, despite Mary knowing all the physical facts about colour, there is one important fact she did not know.  What the colour actually looks like.  If a purely materialist version of the world is true and that technology can completely access human experience then pre-liberation Mary should surely have an entire theory of colour experience.

As Gutting points out, right now a purely materialist view of experience has a problem:

“…we find it hard to make sense of the idea that experiences themselves – seeing red, feeling pain, falling in love – could be purely physical…..What science can observe is public and objective, what I feel is private and subjective. “

So while technology might help us identify the workings of the brain in some areas (e.g. word recognition), and we may see human style activity in robots, we are nowhere near the point that we can engineer access to our inner minds.  As Philip Goff writes:

There are of course other challenges to these points but rather than get caught up with a binary dispute, it might be worth thinking about some alternatives. Because there is a temptation with this type of debate that we assume one approach is right and the other one wrong.  But philosopher Mary Midgely suggested we can operate in a way that we do not need to aim to have one single explanatory lens for all of human behaviour.  She uses the metaphor of an atlas to help unpick this:

“At the beginning of an atlas, we usually find a number of maps of the world. Mine gives, for instance: world physiography (structure and seismology), world climatology (mean annual precipitation, climatic fronts and atmospheric pressure), world vegetation, world political, world energy, world food, world air routes and a good many more. If we want to understand how this bewildering range of maps works, we do not need to pick on one of them as ‘fundamental….We have to relate all these patterns in a way which shows why all these various maps are needed, why they are not just contradicting one another, why they do not just represent different alternative worlds…We have to see the different maps as answering different kinds of question, questions which arise from different angles in different contexts. “

So perhaps we can be comfortable with the notion that a range of perspectives can be considered true – we do not need to attempt to find a single ‘truth’.  The choice of theory and tools really depends what question we want to answer.

How distinctions are becoming blurred

In a COVID world, it is easier to see the way that what might once have been struct demarcations in our lives (such as between mind-body) are becoming blurred. For example, in our changing relationship with the natural world.  As health researchers are pointing out, we can see the way in which human activity is transforming the earth’s natural ecosystems by altering the patterns and mechanisms of interaction between species and enabling the transmission of diseases across species and to humans.  In these circumstances it is perhaps harder to argue for hard binary distinctions between humans and the natural (material) world.

And from a technology perspective, Philosopher Donna Harraway, author of Cyborg Manifesto, suggested that the “almost science fiction-like things that we now encounter are good examples of the way objects have increasingly blurred the subject/object boundary.”   These types of objects are what Latour calls quasi-objects, or hybrids. They don’t quite belong to either pole of the nature/society dualism or can’t be easily defined as subjects or objects:

“we find ourselves invaded by frozen embryos, expert systems, digital machines, sensor-equipped robots, hybrid corn, data banks, psychotropic drugs, whales outfitted with radar sounding devices, gene synthesisers, audience analysers and so on…when none of these can be properly on the object side or the subject side, or even in between, something has to be done.”

What about less dualist approach to mind-body?

Descartes suggested there is a hierarchical continuum of living beings with the ‘Great chain of being’ – with a binary distinction between mechanical unthinking matter (minerals, plants, animals, human body)  and the pure thinking mind (exclusive to humans and God).    On this basis, it is humans alone that are a mixture of extended matter and thinking mind; all other living things are simply automata, unable to have actual experience and as such unable to feel pleasure or suffering.

However, more recent thinkers suggest that access to our inner life may not be quite the distinctive feature of humans as we might like to think.  Philosopher Thomas Nagel argued in his classic article “What Is It Like to Be a Bat?,” that we humans are unable to inhabit the consciousness of any other animal. In a similar vein, as Nicholas Carr suggests, “Our relationship to an AI, and its to us, would be characterized by radical unlikeness….we would be unable to recognize that it even has a consciousness or a being. It would remain, in our perception, an inanimate thing that we have constructed.”

So while we have not yet solved Mary’s Room, perhaps the most popular Thought Experiment in philosophy, could we now be in an era where a combination of our changing relationship with technology on the one hand and nature on the other, that we are starting to fundamentally alter our centuries old view of humans as very separate from the material or natural world?

Returning to Descartes, what is less known about him is that after the tragic death of his daughter Francine, he created an automaton replica of her, subsequently speaking to, sleeping besides, and obsessing over the machine. In a sense, having separated the body (object) from the mind (subject), he then proceeded to act as if the object and subject were in fact intertwined.

Just as Descartes so tragically did, perhaps we too are now radically rethinking some of the traditional binary distinctions in the world.